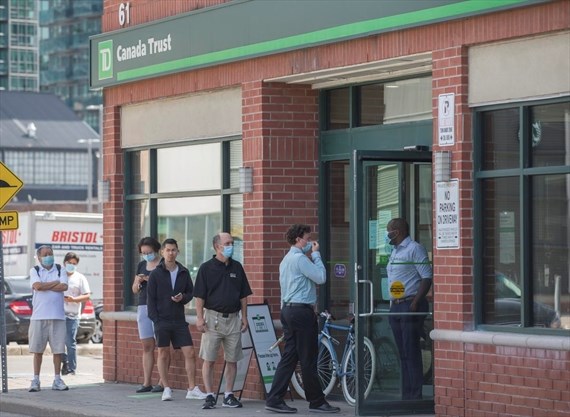 Experts say the “digital divide” — the gap between Canadians with access to internet and mobile phones and those without access — is widening thanks to the pandemic in myriad ways from access to contact tracing apps and public health information, to basic services such as banking.

Marina Pavlovic, an associate professor at the University of Ottawa’s law faculty, considers this divide both a social and an economic problem.

Businesses and government services are increasingly moving online, which is “highly problematic” for a lot of people, she said.

The gap is widening, Pavlovic said, and only becoming harder to cross.

Sam Andrey, director of policy and research at the Ryerson Leadership Lab, said there are three main aspects to the digital divide: hardware, such as computers or cellphones; software, the programs that hardware can run; and connectivity, the ability to access the internet via Wi-Fi or data.

“This kind of rapid shift to — in many respects — an entirely digital lifestyle ... has brought renewed urgency to the issue and exacerbated existing gaps,” he said.

According to the Canadian Radio-television and Telecommunications Commission’s 2019 Communications Monitoring Report, 90 per cent of Canadian households have a mobile subscription, while 89 per cent have internet. These are both up 1.8 per cent from the previous year’s report. However, the percentage of Canadians with access to mobile phones and internet changes when income is factored in: the same report found that while 2.4 per cent of the highest-income households relied solely on a landline, 23.9 of the lowest-income households only had a landline.

Pavlovic said many vulnerable, low-income people have trouble getting a smartphone not just because of the cost, but because they don’t have a credit card or a credit score.

“It’s this infinite loop where you need a credit card in order to get a loan and you need a phone to get a bunch of other services, including the credit card.”

It’s not enough to have a smartphone — it’s also about the plan the phone user is able to afford and whether they can access the internet without a Wi-Fi connection.

Pavlovic said public libraries and school campuses have often served as backups for people who don’t have a lot of data to use, or who may not have their own home internet. But as school increasingly moves online and libraries limit their services, those connections are harder to access, she said.

Alejandra Ruiz, a member of advocacy group ACORN Canada, said many people rely on libraries and community centres to stay connected, apply to jobs and more.

She said ACORN is advocating for Toronto to provide free Wi-Fi in public parks to offset that gap and make it more accessible to the wider population.

Adela Colhon, general manager of the YMCA of Greater Toronto, said while the YMCA has moved a great deal of its services online, and created new opportunities including the digital community platform The Bright Spot to keep people connected, it has made sure to keep other ways of accessing services available. It is encouraging clients to book appointments via an app, but allows people to phone in as well, she said.

“It’s important to have both.”

Michael Geist, a University of Ottawa professor specializing in technology law, believes access to affordable connectivity should be considered a basic utility, and that for years the government has been pushed by advocates to fill in the gaps. Now, he said the pandemic has made these needs even more urgent.

“There are too many Canadians that don’t have affordable access at a time that is absolutely critical.”

Pavlovic said businesses are adapting to the next shift, and may fall behind if they fail to adapt.

“In order to drive economic growth, businesses need to reinvent themselves,” she said, adding businesses aren’t trying to leave out a segment of the population, but may inadvertently be doing so.

Before COVID-19, there was always an analog option, she said, but now those options are disappearing, and may never return.

Businesses that can’t afford to boost their online presence may be left behind, said Pavlovic. This will impact both the families that own those businesses and the people who rely on them.

Dan Kelly, president of the Canadian Federation of Independent Businesses, said while e-commerce and the use of technology for businesses were trends before COVID-19, they took a “giant leap” at the start of the pandemic.

“It has been a struggle for small- and medium-sized firms to try to ensure that they can offer the same degree of digital services that the customers have demanded and … in some cases needed,” he said.

Businesses that didn’t have an online presence had to rush to make one, he said. For example, many restaurants started adopting meal delivery services to make ends meet while their dining areas were closed.

“But that has come at a giant cost,” said Kelly. These services charge extra fees.

But as they shift, businesses risk shutting out certain customers, he said, such as older clients or lower-income people. Businesses need to figure out how to offer both options.

A July 2020 report by the Cybersecure Policy Exchange found that Canadians have been banking and shopping online more since the pandemic began. But Andrey said those numbers again differ depending on respondents’ income. He said 54 per cent of households with an income below $20,000 reported online shopping during the first two months of physical distancing, compared to 85 per cent of households with an income above $100,000.

Recently, the Canada-wide contact tracing app COVID Alert came under scrutiny, because it only works on newer smartphones. Experts are concerned that just being able to download and run the app could become an accessibility issue that leaves out a large portion of the population.

Andrey is concerned that in the near future, stores might require their customers to have the app.

“We have been pushing government to pass legislation and new regulation, to make sure that having the app is not used to refuse service,” he said.

Meanwhile, Pavlovic is concerned some employers will require employees to have the app, leaving certain people out of the economy in the process.

“How far can businesses go in terms of requiring particular preconditions for people to go back to work?”

While there are programs that offer free cellphones to some people, or assistance with the cost of home internet — and some telecom companies have their own programs for lower-income customers — experts and advocates say the government and telecom companies need to work together to co-ordinate a wider strategy.

Andrey said as a start, he’d like to see more investment in some of the programs that exist, such as device refurbishment and loan programs.

Pavlovic said there isn’t one uniform way to attack this issue, as it requires all levels of government to do their part.

Geist said there are two issues that need addressing: the accessibility of broadband and mobile coverage, which are much less widespread in rural communities; and the affordability of both.

The solutions are already out there, he said.

“The choice ultimately has to be made … are we as a society willing to foot the bill?”

Article by Rose Saba for the Toronto Star