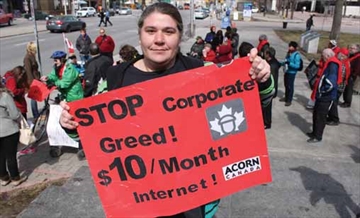 He said the Internet allows him to regularly connect with Immigration Canada and fill out the necessary forms in his quest for Canadian citizenship, which is especially important because there is no immigration office near his home.

But, he says, the $70 price tag he pays every month is too high, and has, in the past, made it tough for him and his wife to stretch their dollars. They've even turned to the food bank during tough times.

This prompted Fitzpatrick to join about 40 members of the Association of Community Organizations for Reform Now, a low-income advocacy group with chapters in Ottawa, and march 10 kilometres through the downtown on April 17. They are calling on Bell, Rogers, Telus, and the federal government to provide people living below the low-income measure with high-speed Internet for $10 a month.

"Fight, fight, fight. Internet is a right," ACORN members chanted near the Canadian Tribute to Human Rights at the corner of Elgin and Lisgar streets. Some walked while others navigated their wheelchairs in a loop that took them past the Parliament Buildings as well as Industry Minister James Moore's Queen Street office.

ACORN members chose to begin and end their rally at the human rights memorial to reflect a 2011 United Nations report stating Internet access is a human right.

"And I agree with that because I cannot even begin to describe all the ways that people are connected ... with the Internet," Fitzpatrick said.

Figures released in a 2012 Statistics Canada Internet usage survey tell a similar story. Almost all those households surveyed making $94,000 or more had home Internet access, while 58 per cent of households earning $30,000 or less were connected online.

But the advocacy group points to promising developments south of the border where Comcast launched an Internet program in 2011, offering low-speed Internet for about $10 a month, free Internet training and the chance to purchase a low-cost computer. ACORN's members are also closely watching Toronto, where Rogers launched a pilot program to provide high-speed Internet to some community housing residents for about $10 a month, as well as the opportunity to buy a refurbished $150 computer.

"It's something that is a huge part of everybody's life, and, like food or anything else I think that there should be easier and less costly access, especially for kids nowadays," said Vanier resident Jaye Rutter. She attended the rally because she says she pays $79.95 a month to connect online, which eats into her grocery budget.

"You can't find a job the old way anymore," she added. "You can't even go in and bring in a resume. Everything is through the computer. It's like a telephone. It's necessary."

For some, like Fitzpatrick, free Internet access at Ottawa library branches is neither convenient, nor easily accessible. Computer use is limited, said the chair of ACORN's South Ottawa chapter. Because of his visual impairment, Fitzpatrick must hook up a device to a computer that reads words on the screen to him. But he isn't able to plug his screen reader into a library computer.

"A library computer would not be the best solution," he said.